While the economic event that came to be known as the “Mortgage Crisis” became a nationally known phenomenon in the summer of 2007, the Teton County real estate market was able to “hover in limbo” through September of 2008. Subsequent to that point, the market experienced nearly three consecutive years of value loss, until values largely stabilized in the middle of 2011.  A period of stabilization then ensued through approximately the end of 2012.  Beginning in early 2013, the surplus inventory in various market segments began to disappear, with a lack of inventory being observed in some segments, in particular the lower-priced segments of the market. This shortage of inventory, combined with mortgage interest rates that have begun to creep back up, has motivated many potential buyers “off the fence” and into the market. The result has been a moderate rebound in prices that appears to be compensating for prices that buyer reticence may have pushed to an artificially low point.

Through the fall of 2008 the residential sector of the Teton County, Wyoming Real Estate Market had been experiencing a strong increasing value trend.  At the end of July of 2007, the labeling of questionable loan packaging practices occurring in the mortgage intermediation markets referred to as “the mortgage loan crisis” triggered a barrage of articles in financial periodicals decrying the poor health of the housing market. The Teton County housing market initially showed some resiliency, with a standoff between buyers and sellers resulting in decreased sales volume, but value loss being overtly apparent. Market sentiment changed, however, in the fall of 2008, with the near collapse of the financial markets and the definitive global acknowledgement of a recession. As sellers eventually acquiesced to the reality of diminished demand and limited financing, value losses were noted that ranged from as little as 15% to an over 50% value loss in some market segments: 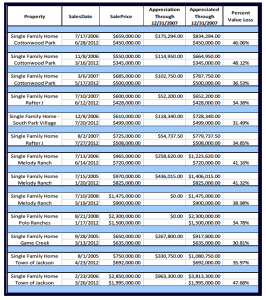 As of mid- 2011, a price stabilization was noted. In the late winter / early spring of this year, a lack of inventory was noted and anecdotal reports of upward price pressure began to surface. This was largely attributed to a decrease in inventory that was anecdotally being reported by real estate agents that “had buyers, but very little to sell them.” A recent observation of available inventory corroborates this point, with active inventory as of the end of May being down 18.32% as compared to the same time last year. 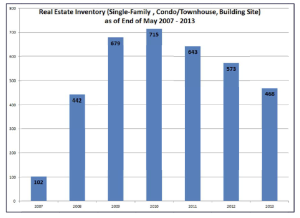 Notably, the existing inventory is still over three times that of pre-mortgage crisis levels. However, that market was considered to have an under-supply of inventory and the current levels may be healthier. Even so, some shortages are apparent, such as in the more moderately-priced Jackson / South of Jackson market area, which currently only have 13 single-family detached homes listed for sale for less than $600,000. Considering that 57 homes sold in this price grouping in the past 12 months, this equates to only 2.73 months’ worth of available inventory.

In reaction to contracting supply, demand for existing inventory has intensified, with the logical intuition being that prices should rebound to some degree. This intuition of upward price pressure has, in fact, been corroborated by market data as shown in the following table: 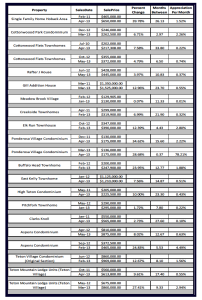 The preceding data shows price growth in re-sales of upwards of 39% and monthly rates of appreciation ranging from .01% to 78.21% per month.  It, therefore, appears that after an extended period of depreciation, prices are rebounding from what likely was an over correction from the recession. This is most notable in the lower end of the market. With the likelihood that this price growth is at least partially due to a “whipsaw” effect from a previous downward price overcorrection, care should be exercised before extrapolating appreciation rates that are extracted during this period of rebound over the longer term, or developing an expectation that prices will “shoot back” to pre-2008 price levels. While difficult to prove empirically, the current upward pressure in prices is hypothesized to be the result of low price points, low interest rates, and preliminary indications that favorable interest rates are beginning an upward climb. The inevitability of increasing interest rates and lending practices that are more conservative than existed pre 2007 may provide that the current upward value spike will be moderated to a more sustainable level of appreciation over the intermediate time horizon.