Prior to 2007 the residential sector of the Teton Valley, Idaho real estate market had been experiencing growth both from new fulltime residents as well as “overspill” purchasers from the Jackson, Wyoming market, which was rapidly outpacing the purchasing power of many Teton County, Wyoming residents. During this time period, increasing value trends were often erratic, with “crossover” market participants from Wyoming causing appreciation to occur in large spikes (versus a gradual upward trend). The increased interest in Idaho real estate provided the motivation for developers to create multiple living opportunities in the form of residential subdivisions. The rate of subdivision development was noted during this time to be outpacing the rate of population growth considerably. Despite the increase in supply caused by these developments, property values continued to climb as most developers showed themselves to be positioned for longer-term investment windows and released product at their own discretion (rather than flooding the market at that time). Undoubtedly, the greatest boom to property values during this period was the creation (or at least firm establishment) of both a speculative investment and second home market. Participants in these market segments were primarily purchasing vacant land with the hope of profit through eventual resale. Coincidentally, with the growth of these markets was the emergence of the luxury real estate market via the construction of several golf course developments. These developments created price points that could be interpreted as a “narrowing of the gap” in pricing between Teton County, Idaho and Teton County, Wyoming. This perception enticed developers to construct increasing amounts of high-end product on speculation.  As inventory of product, both vacant land and improved homes, began to mount during 2005, 2006 and early 2007; prices remained strong and continued to show increases as market momentum continued to outweigh concerns over supply and demand. At the end of July of 2007, the labeling of questionable loan packaging practices occurring in the mortgage intermediation markets referred to as “the mortgage loan crisis” triggered a barrage of articles in financial periodicals decrying the poor health of the housing market. These articles were perhaps the impetus for local market participants to take serious notice of the oversupply that had developed in the Teton County housing market. Initially, the most tangible evidences of this acknowledgement occurred in the luxury real estate market. However, by mid-summer of 2008, evidence of “corrections” in the more affordable market segments was available, and the concern of the price softening that had initially occurred in the resort market segment was now affecting the entire Teton Valley market area. The year 2009 again exhibited slow sales and decreasing values throughout all segments of the market. In 2010, there was a slight rebound in the number of transactions. However, values continued to decline. By year end 2011, value losses approaching 80% from peak values were noted in some market segments. 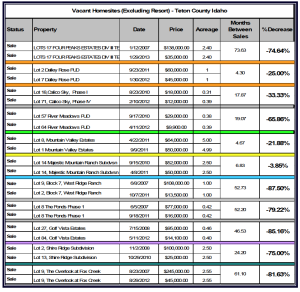 As of the end of 2011, anecdotal reports from Realtors were indicating that many of the extremely discounted sales had been purchased and a market bottom had been established. At the time of these initial reports, a lack of paired sales data (sales and re-sales of similar or identical properties that can be used to gauge value trends) made these anecdotes difficult to translate into tangible evidence of price growth.  More recently, paired sales data has surfaced to corroborate the intuition of upward price pressure as shown in the following data:

The preceding data shows price growth in re-sales of upwards of 36% and monthly rates of appreciation ranging from .95% to 1.99% per month.  Notably, the lowest rate of monthly appreciation is associated with a comparison with the oldest initial sale date (April of 2011). This provides the indication that appreciation rates have increased at a greater rate more recently and, in fact, this is supported through the analysis of sales in the Sage Hen Townhomes, which have shown rapidly escalating prices since the beginning of 2013.

The preceding table is comprised of one closed comparison and three comparisons involving pending sales. The prices of the pending sales were confirmed as being full listing price, and the closing dates were estimated based on Realtor interview. Review of this data shows price appreciation ranging from 4.81% to 26.92%. Considering the short period of time in between these sales (in particular, comparisons No.3 and No.4), the monthly appreciation rates are nonsensical at the high end of the range. That said, comparison’s No. 3 and No.4, can be interpreted to be indicative of a “leap frog” style of appreciation whereby the last unit has jumped an average of 5% over the previous unit sale.

After an extended period of depreciation, signs are apparent that the Teton County, Idaho Real Estate Market, at least at the lower end, are rebounding from what likely was an over correction from the recession. This is good news for Teton County, Idaho. That said, care should be exercised before extrapolating appreciation rates that are extracted during this period of rebound over the longer term, or developing an expectation that prices will “shoot back” to pre-2008 price levels. While difficult to prove empirically, the current upward pressure in prices is hypothesized to be the result of low price points, low interest rates, and preliminary indications that favorable interest rates are beginning an upward climb. The combination of increasing interest rates, large amounts of vacant land available for development, and the current and more responsible lending guidelines may provide that the current upward value spike will be moderated to a more sustainable level of appreciation over the intermediate time horizon.